If you ever wondered about the basics of how to play baseball, let me assure you that you are not alone.

Being the second most popular sport in the USA, thousands of sports enthusiasts are looking for the answer to this question. Besides the USA, it has garnered about 65 million players from140 countries around the world.

Here go the most common baseball terms that you must know before start playing baseball.

The infield is the starting point of the baseball field. It is consists of the first pitcher’s mound, grass within the dirt area, three bases, and lastly the home plate.

The players who can stand in the infield are shortstop, catcher, pitcher, and first, second, and third baseman. These players are known as an infielder.

The area beyond the infield is called the outfield. This is mainly the grassy area after the infield. This middle portion is called as center field. The right part is the right field, and the left one is left field.

In general, the defensive players stand in the outfield. In every portion, there is one fielder. These fielders are also named as the field position name, which is center fielder, right fielder, and left fielder. These players are known as an outfielder.

The home plate is the most integrated item of a baseball field. It’s a five-sided rubber slab. This slab is being used for two different purposes.

i. The umpires use this plate to determine the width of the strike zone when the pitchers pitch the baseball.
ii.  And, it is also used as the final base of the runners. Every runner must touch this plate to score a run.

Catcher is the player who stands behind the home plate. He receives the balls from pitchers. Even when the runners try to score a run, the fielders return the ball to the catcher.

Point to be noted: the catcher’s position is available in both baseball and softball. There might be some differences between softball and baseball, but every sport requires a catcher.

The batter or hitter is the one who faces the pitcher of the opposite team. In short, he/she hits the ball by using a bat and strike it as far as you can.

The hitter is allowed to hit the ball within the fair territory. But, he has to be capable of dodging the fielder to score run.

Related article: Backyard batting cage you must be needed.

The umpire is one of the most important persons in baseball. He/she declares starting, scoring, ending, and the winner of a match.

There are 2/3 umpires in every match. The first umpire stays on the playground and observes the match directly. Other umpires stay in the outfield and help the infield umpire to make critical decisions.

Run is the scoring system in baseball. It’s like a goal in soccer. When a batter hits the ball and runs through all four bases, this is considered as one run.

By the way, you have to run before the opposite team (fielding team) members collect the ball and throw it towards the base. If the batter doesn’t feel that he/she can’t complete the run, it’s allowed to make a stop in any of the four bases.

To score a mandatory run, the batter has to hit the ball so hard so that the ball leaves the playing ground. If you can hit a baseball perfectly, you can easily score runs.

Out is one of the most crucial concepts of baseball. This decision mainly depends on the umpires. When a player gets out, he/she must be taken out of the field.

However, there are lots of ways to get out in a baseball match. Let’s have a look at the important ones.

When a batter hits a ball into the air and one of the members of opposite team capture before it touches the field, that’s an out! It is the most common form of being out in baseball.

If a batter gets three strikes at a row while batting, this is an out. But, only an umpire can make this decision. This is known as a strikeout for the batter.

Multiple base runners cannot occupy the same bases at the same time. Let me make it clear by a real-time example.
Suppose you are standing on the second base now, and a teammate of yours decides to retake the second base, you must move to the third base. While a base runner encounters such a situation where he/she is forced to move, this is called a force out.

This is an interesting one! You might get surprised to know that a base runner can get out even when he/she isn’t batting.

When a runner attempt to hop in the further bases and a fielder touches the runner with the ball or gloves (with the ball in it), this is called tag out. But, the runners cannot be tagged out while he/she stays in the base.

Base Runner Passing Another Runner

The base runners must pass the bases sequentially. If a runner passes another runner, this will be considered as an out.

A base runner must stay within 3 feet of the base path. If he/she goes outside within 3 feet, this is definitely an out.

Touching Base In Order

You know there are multiple bases in a baseball field. To score a run successfully without getting out, the player must touch the bases in order. It’s not allowed to skip any base. These activities will result in an out for the runners.

These are the most common reasons for getting out in baseball. There are also few other ways of getting out, such as illegal running, failure to tag up after
, batter or runners interference, etc. 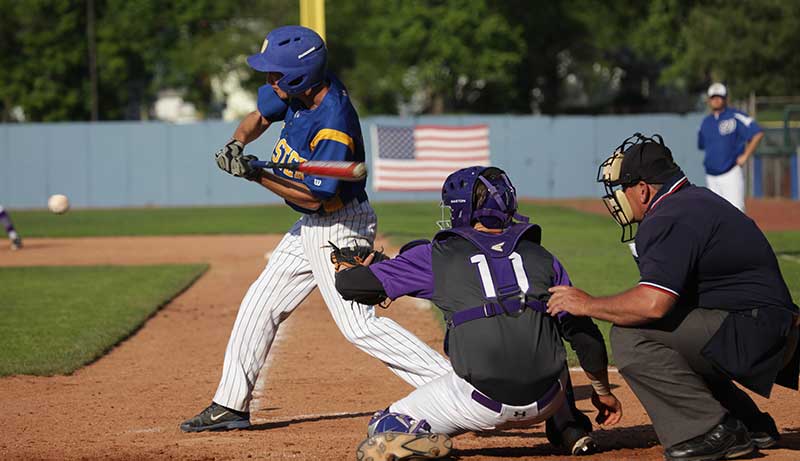 Here goes your long-awaited topic. Yes! In this section, we’ll talk about the most asked question which is how to play baseball?

Let’s have the ball rolling.

1. A baseball team can be made of 25 players. But only 9 of them are allowed to play in the field. The rest of them has to stay on the bench. They can play in the field as a substitute player.

2. Every player must stay in the exact position. The batter or runner should not stay off base. It will result in an out for him.

3. The batting team must pick a batting order before initializing a match. This sequence cannot be altered in the game. If the team decides to use a substitute player, he/she must bat in the substituted player’s position.

4. There should be at least nine innings to complete a game. There is also a half innings system that begins after any team records three outs. The umpire declares the half innings time.

If the match gets tied after nine innings, umpires can continue the match until a team wins the match.

5. When a batter hits a ball, he/she must make an effort to move the further bases. The batter can run as many bases as he wants without being tagged out.

6. A batter gets a maximum of three strikes before getting out. These strikes are considered when the batter swings the bat and misses it. The batter might leave a ball only if it isn’t within the strike zone.

7. In case a batter misses four balls within the strike zone, he/she can walk to the first base.

8. The batter and pitcher must stay in their position to avoid tagged out or boundary out.

9. The batter can run to the next base if there’s no possibility of being tagged.

10. Umpire’s decision should is considered as the final decision. But, the infield umpire can seek help from the outfield umpires if needed.

You may also like some of the top-rated softball bats from our list, so take a moment to check them out.

Baseball is ingrained in our American blood. To get involved in this game properly, you must know how to play baseball well.

This article covers the rules and basic baseball terms that you should know before start plating. In case you want to know anything further, feel free to put your question in the comment box.

Why are you still waiting now? Wake up and get ready for the match.